Listen again to this brilliant audio essay by our very own Zadie Smith, award-winning author. 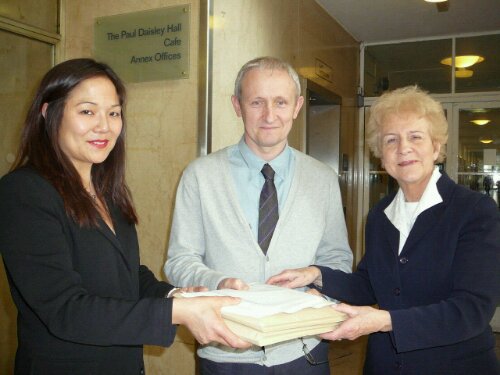 More than 10,000 people across Brent have signed a petition opposing Library closures. Preston alone had 6,000. Every signature is a voice that is being ignored by the council.  That is 10 times the 1134 respondents to the consultation, 82% of whom also REJECTED closure.

The Taxpayer’s Alliance 2011 Town Hall Rich List is out.

Cornwall Council comes top of the Rich List, with 32 officers earning £100k+. Just 3 more than our dear cash-strapped Brent. EXCEPT Cornwall is NOT closing its libraries to meet budget cuts.

Chief executive, Gareth Daniel, takes home a massive £250,000 (including pension) at a time when we are being to accept cuts to services.

Brent boss, Gareth Daniel who has cut a controversial figure during his tenure at the council, earns £60,000 more than the Prime Minister and a staggering seven times as much as a newly qualified teacher working in inner London, who takes home £27,000 a year.

Police Surgeries at the Library

The Preston Safer Neighbourhood Team have organised regular contact sessions in Preston Community Library where local people can report crime in person to a Police Officer or seek general help and advice. A Police Officer will drop into the Library at the dates and times shown below.

The contact details for the Safer Neighbourhood Team are:

Library of the Year 2019: shortlist spotlight | The Bookseller

The judges said that “For the first time, The Bookseller’s Library of the Year shortlist also includes a commendation for a volunteer-run library, Preston Community Library in Brent. Although the award supports professionally-run libraries with paid and qualified staff, this year we felt there should also be some recognition of the commitment and hard work shown by volunteers who keep a form of library provision in their community against the odds.”

Congratulations to all of our volunteers who work tirelessly to keep the library open. Above all, this award recognises the vital importance of local libraries to their communities, which is why thousands of people fought to keep Preston Library open, and continued to fight for several years to re-open it.

All of us at Preston Community Library agree that public libraries should be publicly funded, and run by paid professional staff. But, as custodians – for the time being – of Preston Library we are extremely proud of what we’ve achieved, and honoured to have been recognised in this year’s Library of the Year awards.

MESSAGE TO LIBRARY MEMBERS AND SUPPORTERS OF THE LIBRARY

We know there is local concern about the future of the library when the Carlton Avenue East site is redeveloped. We would like to reassure library users that:

We have been fighting to keep a library on the current site for over eight years and since 2015 have run a community library there, with a temporary licence from Brent, and with the help of a dedicated group of volunteers and fundraising events supported by local people.

In September 2016 Brent announced plans to redevelop the site, with housing and provision for a replacement library on the ground floor. We opposed this, because we wanted the site to remain solely as a library. However the Council resolved to go ahead with these proposals and now has a plan for twelve flats, plus a new library on the ground floor.

When it became clear that we could not stop this, we took a decision to do all we could to preserve a library on the site. For the last two and a half years we have worked closely with Brent on plans for the new library, and the Council supported our successful application for a grant to fit it out. We are currently negotiating a new lease with the Council, and we believe that the new development will provide a permanent and sustainable home for Preston Community Library on Carlton Avenue East. The Council has applied for planning permission and details are available on the Brent website.

We have been offered accommodation in Ashley Gardens as a temporary home whilst the site is being redeveloped. We looked into what other buildings might be available locally, but found nothing else suitable. We are currently negotiating a licence for the use of the Ashley Gardens building with Brent, and will not leave our current premises until suitable temporary premises have been secured.

Preston Community Library does NOT support the petition currently circulating which opposes the redevelopment, because the new development is the only way to ensure the continued existence of the library.